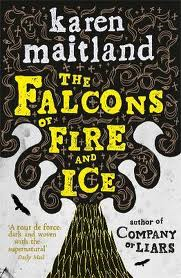 The year is 1539 and the Portuguese Inquisition ushers in an era of torture and murder. When the Royal Falconer is imprisoned on false charges to remove him from the inner circle of the boy King, the Inquisitors strike an impossible deal with his daughter, Isabela. Bring back two rare white falcons from Iceland within the year or her father dies.

Meanwhile in Iceland, a menacing stranger appears to have possessed the soul of a woman chained up in a volcanic cave and is threatening to destroy the community. The woman’s twin sister, Eydis, is desperate to intervene but vivid dreams suggest the twins’ only salvation lies with a young girl from afar, travelling in search of white feathers …

Isabela’s quest might hold a more crucial purpose then she could ever imagine and there are those among her travel companions who have an interest in doing her harm. But in order to fulfil her destiny, first she must reach Iceland’s shores. Alive.

I’m a big fan of Karen Maitland and I urge anybody new to this author to read her novels. Her previous works include The Company of Liars, The Owl Killers and The Gallows Curse which are all stand-alone novels based in the medieval period, and all in my opinion, excellent reads. Her fourth book, The Falcons of Fire and Ice is a bit different as it is split between two countries, Portugal and Iceland, and I was curious to see how the story would be structured. Each chapter is narrated by a different character – the first is Isabela, a young woman whom when her father is imprisoned under suspicion of murdering the King’s prized falcons, must travel to Iceland to replace the rare birds as a condition for his release. Ricardo who goes under many alternative names, is our second narrator and a bit of a “rogue.” He is employed by the Jesuit Inquisitors to get rid of Isabela before she reaches Iceland, on account of her family being Jews and therefore heretics to the “true Catholic faith,” and as a means of manipulating the young King against her family. The third narrator is Eydis,  one half of a twin trapped in a cave with her sister by means of iron bands around their waists. The sisters have the gift of second sight and are often used by the residents of the village for healing remedies.

From the beginning, I really enjoyed reading the two different stories, and thought the author was very effective in the way she weaved both narrations together and allowed the reader to hear all the characters voices. I also find it refreshing in that her stories rely heavily on historical facts and she puts some lovely historical notes in the back which are well worth reading. What I didn’t expect from this novel was the way in which my emotions were manipulated – I probably felt every range imaginable throughout the novel, from anticipation and excitement through to fear. Trust me, this book is seriously creepy at some points but I’m not giving anything away, you’ll just have to read it.