For Milo, everything’s a bore. When a tollbooth mysteriously appears in his room, he drives through only because he’s got nothing better to do. But on the other side, things seem different. Milo visits the island of Conclusions (you get there by jumping), learns about time from a ticking watchdog named Tock, and even embarks on a quest to rescue Rhyme and Reason! Somewhere along the way, Milo realizes something astonishing. Life is far from dull. In fact, it’s exciting beyond his wildest dreams…

This is the third book in my “kid-lit” challenge with my sister ChrissiReads, and one picked by me as I’ve recently heard a lot about it but had never come across it as a child. The illustrations by Jules Feiffer are absolutely beautiful and I was so glad they were on the Kindle edition – they make it a lot easier to picture the weird and wonderful people/creatures that Milo comes across in his adventures. It has been compared to The Wizard of Oz and I can definitely see the similarities, the tollbooth journey to a different land, the friends who accompany our character on his quest and that he has to say goodbye and return home at the end. Shame there wasn’t an equivalent to the ruby slippers but hey, you can’t have everything.

In all seriousness, I think this is a classic childrens story jam-packed with excitement and adventures, fun and a few little morals, some scary but appropriate demons and even a subtle joke and intricate wordplay for the adults. I think it would probably be enjoyed more by older children, who can understand the references a bit better, but I think younger readers would enjoy the crazy cast of characters. My favourites had to be Tock, the loyal (and useful for telling time) dog, and Chroma the music conductor. There are some brilliant quotes in this book also:

“Expect everything, I always say, and the unexpected never happens.”

“The most important reason for going from one place to another is to see what’s in between, and they took great pleasure in doing just that.”

I think sometimes the best children’s books are ones like this where you have a lot of fun but learn a little something along the way. 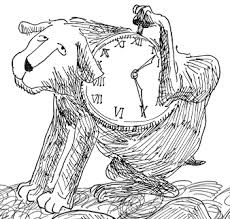