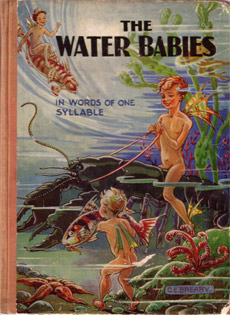 The story follows Tom in his land-life as a climbing boy for a chimney-sweep and in his after-life as a water-baby, where he gains redemption from selfishness as well as from drudgery. On to his fantasy Kingsley grafts a series of digressions and comic asides, through which he comments on a range of contemporary issues.

This is the second book in the Kid-Lit challenge I am doing this year with my sister. This was her choice of book as she absolutely loved the film version of The Water Babies when she was younger and used to watch it constantly. Neither of us had read the book previously so we thought, why not? Some parts of the book were quite beautiful, for example the poetry and songs. I’m sure if I had the illustrated version, I would have loved the pictures as well. The author obviously had a vivid imagination and I can see why some children would love this story, with the adventures and strange creatures that Tom encounters. The brainless turnips and prison-guard truncheons are particularly memorable for me.

However, I did feel that the author went off on a bit of a tangent at times, and I felt a bit lost and slightly bored as some of the adventures felt a bit rushed. Oh, there’s a strange creature – lets ask it why its crying, laughing, etc and then ZIP on to the next one! I felt if there had been a little more interaction with a few less creatures it would have held my interest for longer. Finally, I did enjoy the moral end of the story, and Tom’s reunion with the despicable Mr Grimes.