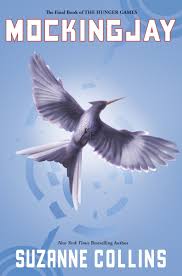 Can Katniss Everdeen win the final fight against the Capitol? Against all odds, she’s survived the Hunger Games twice. But now that she’s made it out of the bloody arena alive, she is still not safe. The Capitol is angry. The Capitol wants revenge. Who do they think should pay for the unrest? Katniss. And what’s worse, President Snow has made it clear that no-one else is safe either. Not Katniss’s family, not her friends, not the people of District 12…

If you haven’t heard about The Hunger Games yet, where have you been? (And why are you reading this review? Start with the first one!) I am definitely a fan of this trilogy however the last book came as a slight disappointment and this is why I haven’t rated it as high. The action is a bit slow to all kick off, although when it did I found myself desperate to find out what was going to happen.

Katniss is a gutsy, feisty character – qualities I find endearing in my heroines and is so refreshing to see compared to other books who tend to favour the weaker female type. But make sure you have some tissues ready for the ending – I’m saying no more….